Growing Exposed is a new video series produced by Jeremy Deichen. Coined “the MTV Cribs of the marijuana industry” the show is led by host Amanda Mackay. Growing Exposed has found a unique way to open up the once underground world, revealing the secrets of industry leaders. In addition to garden tours, David Robinson, author of The Grower’s Handbook lends his expertise in a segment entitled Teachings of The Garden Sage. David has dedicated his life to dispelling the myths behind cannabis while educating people on how plants grow.

———-
What do you get with a master grower and winner of two cannabis cups? A master grow facility… In this episode of growing exposed, our tour guide and veteran grower Justin takes us into a grow operation whose sugar-coated plants live up to the name of the facility “Sugarleaf”. We take a look behind scenes and see the inner workings of a horticultural mastermind with his process, setup, and world-class strains, and take a look at some awesome LED light tech that will make you question buying that replacement HID bulb once it burns out. Jason, Master Grower of Sugarleaf Farms in Washington State, has won two Cannabis Cups in Colorado, and was master grower for both award-winning strains: presidential Kush for the 2014 Cannabis Cup and his flagship strain White 99, winner of the 2015 Cannabis Cup.

Jason’s farm is a 380 light operation north of Seattle. Growing indoors, space is always an issue, but Jason uses a combination of his own creativity and past knowledge and experience which he adopted from his time working at two of the largest companies in the state of Colorado.

In the cloning room, this grow uses an aeroponic system to root clones. This system is fast, condensed and can run 288 cuts per tray. Essentially, you turn it on, go for 10 days and transplant.

In the vegetative stage, Sugarleaf uses 200 watt LEDs and adds in some Gavita 1000W double ended HPS lamps to provide a broader spectrum of light to prepare plants for the flowering stage. Mother plants are grown to insane proportions to allow for cuts, before being trimmed down to a more manageable size. 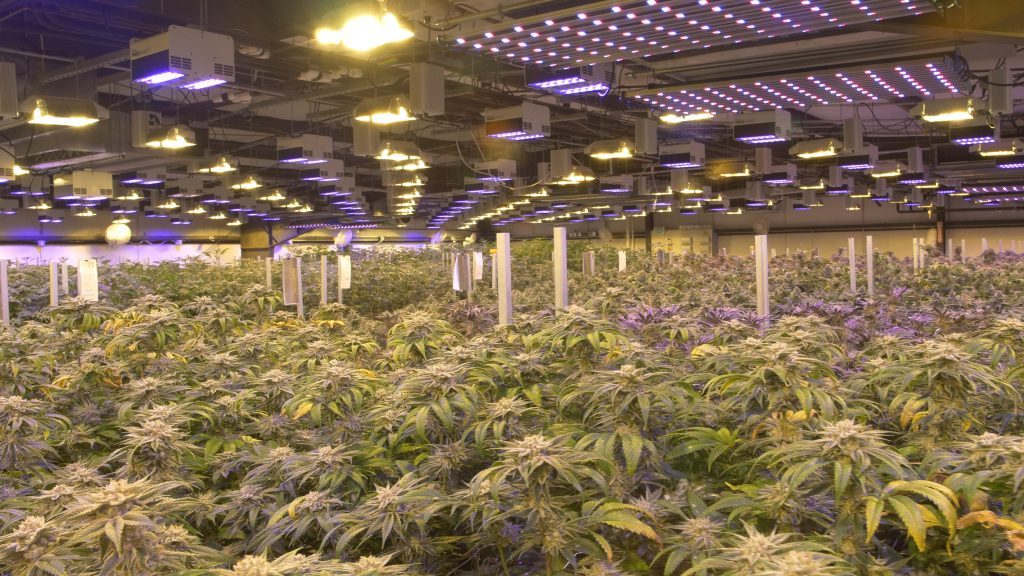 Flower rooms have absolutely perfect lighting, with a checkerboard-pattern of illumitex Power Harvest LED lamps and Gavita double ended HPS lights to maximize growth. The climate control is impeccable, and a tell-tale sign of this perfect climate control is that all plants have upward-facing buds, known as being “tips up” or “praying”, indicating happy plants in a perfect environment. With multiple Quest dehumidifiers and temperature controllers, they are able to control the temperature in different sections of the room seamlessly, so if one end of the room needs to be 60°F and the other 85°F, it is never an issue.

When tending plants, a lot of focus is put on a group of plants to have that home-grown and tended appeal. Each plant is cared for individually every day to ensure they are all healthy
and get the individual attention they need to thrive. With big-style grows, it’s very difficult to pay the same attention to plants as would be done in a hobbyist or individual grow, and applying it to the commercial-style grow is something that Sugarleaf takes pride in accomplishing successfully. 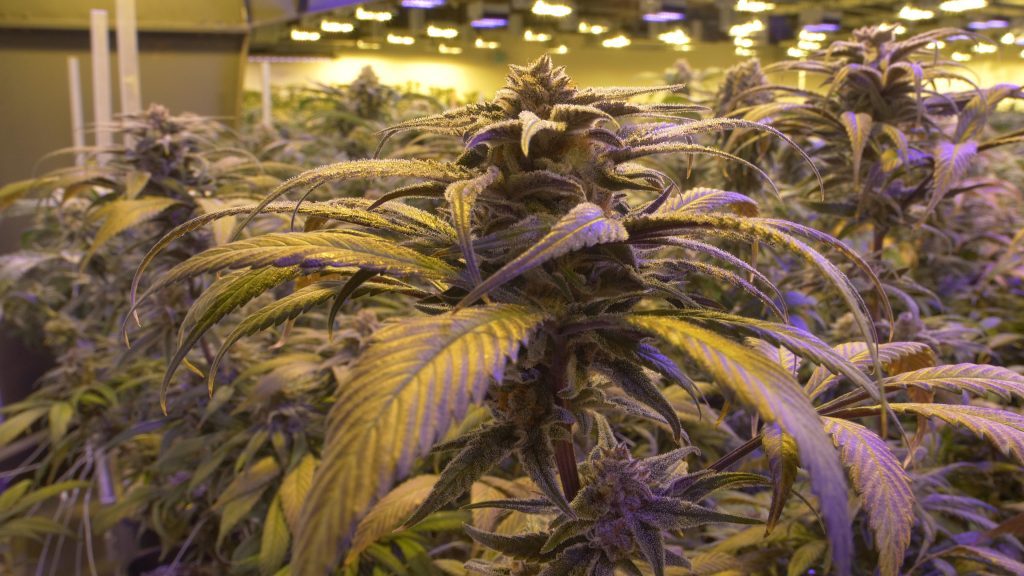 Sugarleaf values their variety of strong genetics and knows that genetics is the #1 factor for maximum, high quality yield. Another thing that drives the strains involved in the commercial production of cannabis is smell, bag appeal, and THC level. All these components push genetics and demand. Tierra Rojo, the Colorado breeder that developed Sugarleaf’s flagship strain White 99, which won them the 2015 Cannabis Cup, was bred using Cinderella 99 and Kromes The White. The strong genetics are presented in this super-strain of cannabis are its tell-tale white colour from being completely sugar-coated in trichomes, it has minimal extra foliage, it’s easy to trim, it has a great bag-appeal with “golfball-sized round nugs”, and contains an incredibly high THC content–28-30% to be precise–all things that consumers highly value in a product.

In the vegetative stage, Sugarleaf uses 200 watt LEDs and adds in some Gavita 1000W double ended HPS lamps to provide a broader spectrum of light to prepare plants for the flowering stage. Mother plants are grown to insane proportions to allow for cuts, before being trimmed down to a more manageable size.

LED For the future of LEDs, there is some great insight from Jeff Bisberg of illumetex LED. Indoor horticulture is the last market to tip as there is so much power requirement for growing indoors. Like the phone went from corded phones to flip phones and finally to smart phones, LED lights are following the same evolution. From HID lights to LED lights, the future seems ever brighter for LEDs in horticulture. With the development of Smart fixtures, lights will not only be able to offer plants perfect lighting situations, the different sensors and data will be able to supplement the grower to make better decisions and provide data that will increase yield and a provide huge amount of benefit to growers and their products. 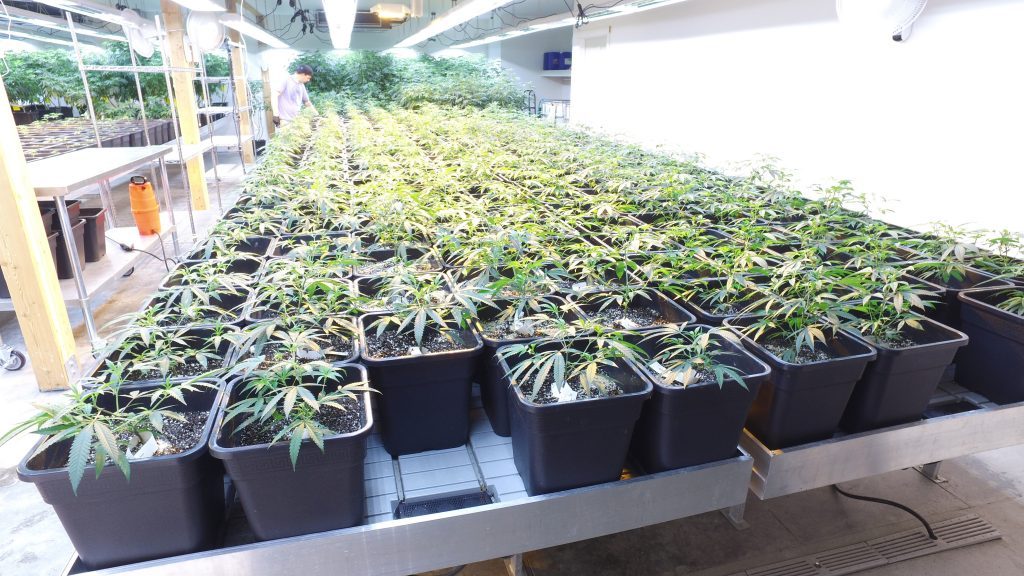 Spectrum King LEDs are full-spectrum LED lights developed in Los Angeles California. Built by growers for growers, Spectrum Kings are developed and designed right in their Los Angeles facility. Spectrum King manufactures, maintains, tests their lights on real plants, giving them ultimate control over integrity and quality of their lighting systems. All Spectrum King LEDs contain golden copper, which takes heat away from the diodes faster and conducts electricity better, resulting in longer-lasting brighter lights. Full-spectrum light allows plants to behave like outdoor plants, so there is minimal variation in flower size comparing terminal and lateral buds, to about 1/100th of a millimeter difference to be precise, and a nearly identical THC and terpene profile. Full spectrum allows plants to produce more secondary metabolites, aids in more terpene production and plants have a higher THC content than standard spectrum LEDs.

Another great feature about the Spectrum King LED is not only will the lights last you years and years, but they are completely waterproof, which is a feature that is invaluable for the savvy grower. Spray down with a hose to clean without any problem or decrease in functionality, these lights are perfect for spray systems and any variation in humidity.

The future of LEDs is brighter than ever, pun intended. LEDs produce less heat than standard HID lights, provide more light per Watt, are more environmentally friendly, are
energy-efficient, and provide consistent performance for extended periods of time. So, what are you waiting for? Make the switch to LED! 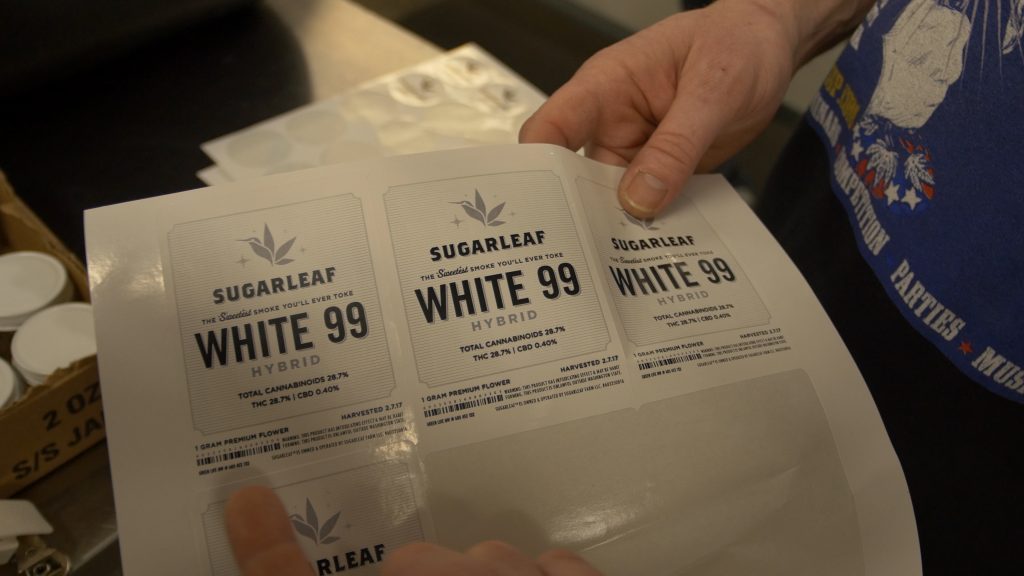 Back to the two J’s, Jason and Justin, we look into the most exciting part of being a grower: harvest time. At Sugarleaf, they dry-cure all their cannabis before they trim, which is a great technique that preserves trichomes the best. Using baker’s racks and office clips, all buds are hung upside-down to dry, which also makes taking them to the trimmers to be processed easy-peasy.

Sugarleaf uses Green Broz trimmers which allow the grading for different size flowers. Grading different sizes allows to better preserve the popcorn buds and minimizes over-trimming. These industrial trimmers are exceptionally gentle, with buds rolling around gingerly over the blades as if being tended by the hands of a careful trimmer, and the results are almost indistinguishable from hand-trimming. Perfectly trimmed buds are then packaged and organised for sale, and the keef, the cultivator’s “gold”, is preserved for pressing hash and other products.

Even though Jason is a master grower, he humbly expresses he doesn’t know everything. In this ever-growing industry, always learning and keeping an open mind to changing technologies, growing styles and techniques is the golden-key to being a Master Grower.

In this episode of Growing Exposed, we looked at Sugarleaf’s top-notch growing facility filled with the nifty space-saving and growing techniques of a Master Grower. We saw the results of perfect climate control and learned about the future tech in growing: Luminex LEDs and the future with Smart Light Fixtures, full-spectrum waterproof Spectrum King lights, and GreenBroz trimmers that trim just as good as hand-trimmed. For more Growing Exposed, and for behind-the-scenes, tune in at GrowingExposed.com and make sure to follow Growing Exposed on Facebook and Instagram.