On this episode of Growing Exposed, we visit the city of Adelanto located in the high desert of Southern California. Nowadays, Adelanto is thriving as the largest production area of medical cannabis in the United States. However, it didn’t start out that way. Adelanto was in a serious financial crisis a few years ago, and the only thing that saved it from bankruptcy was growing cannabis on the largest scale in the whole nation.

As we begin our tour, the first clue that things are going to be different here in Adelanto is the welcome sign with cannabis leaves on it. Their slogan “The City With Unlimited Possibilities” reads bold and true, as Adelanto is now the most progressive city in the United States when it comes to medical cannabis. They owe everything to it, which would have been unheard of 10 years ago. Here, we meet Economic Developer Jesse Florez. He explains that Adelanto is attracting major industries in the cannabis space to cultivate and develop both volatile and non-volatile extractions right in the city. They’re also really focusing on the storefronts of cannabis sales, also known as dispensaries, nurseries, and embracing the entire cannabis industry as a whole in the city of Adelanto. 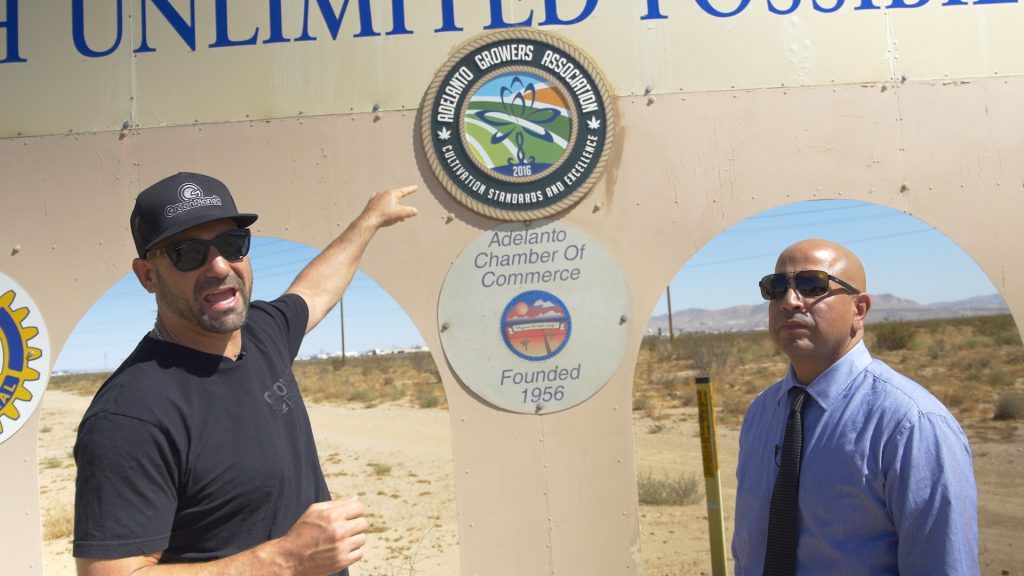 Next, Justin, our tourguide, meets with Mayor Rich Kerr to see how cannabis is changing the overall landscape of the city. The Mayor explains that Adelanto is striving to be the forefront of the medical cannabis industry in in the United States and they embrace folks in the cannabis industry and encourage them to come to Adelanto by providing them with brokers for land, inspectors for buildings.

How are the revenues from cannabis helping the city? Mayor Rich Kurr explains that most of the revenues from cannabis are going into infrastructure: repaving roads, sewer, electric, water, and crime has also gone down 12% since Rich took over as mayor in 2014. In 2014, Adelanto was $2.6M in the red, and nearly filed for bankruptcy. With the help of cannabis, the city is now $20-30M in the black and thriving, all because of medical cannabis. 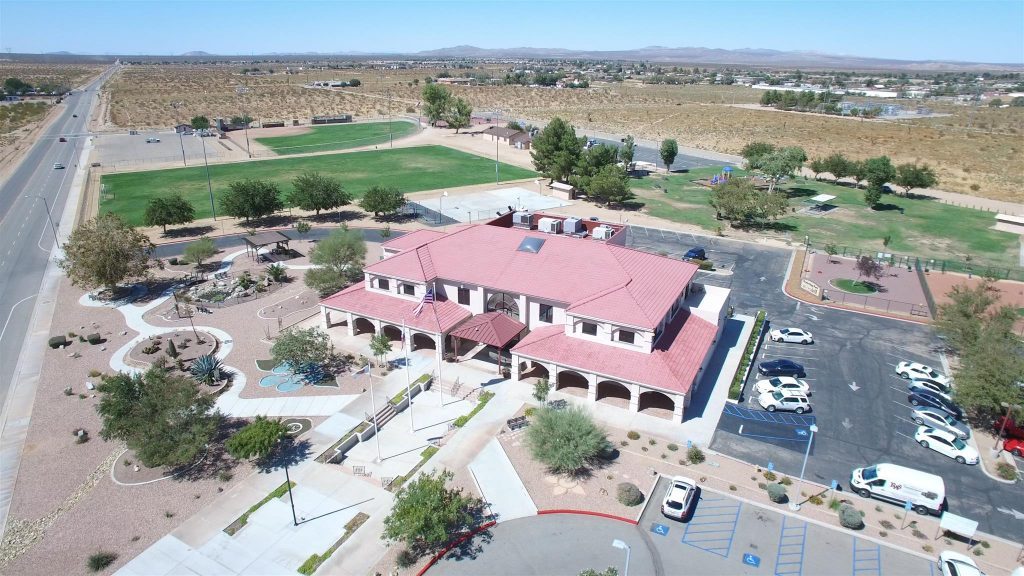 After the productive talk with the mayor, Jesse Florez and Justin head into the city’s cultivation zone. The Cultivation Zone is a designation that the City Council created to authorize the cultivation of medical cannabis. The largest licensed cannabis cultivation facility in the US is in Adelanto, the currently under construction facility is at a whopping 630,000 square feet indoor garden. This facility will be be used to cultivate medical cannabis and extract and process oils to be made into edibles. This facility was entitled within less than 90 days, and within less a year, many more projects are under the way.

Next, let’s get into the garden. Here, we meet Adam who is operating HDC, or High Desert Cultivation. This indoor garden specialises in beautiful looking and even better smelling Cali-grown bud.

In the mother room HDC is running 15 different strains ranging from CBD dominant strains, sativas, indicas, and hybrids. In the flower room, they’re growing a strain called San Fernando Valley OG, one of their top sellers. SFV OG is one of the original OG strains and has a strong sweet aroma. It is a sativa-dominant hybrid that, hence its name, originates from San Fernando Valley. The flowers may not look impressive due to their small size, but they will knock you off your feet.

In post production, large buds go on to becoming beautiful big flower, expectedly, and sold in various sized backs. Smaller buds are used in making extractions. Once the flowers are finished curing, trimmers will remove the buds from the stems and fill bins. This particular harvest is going to be used to make vape pens. 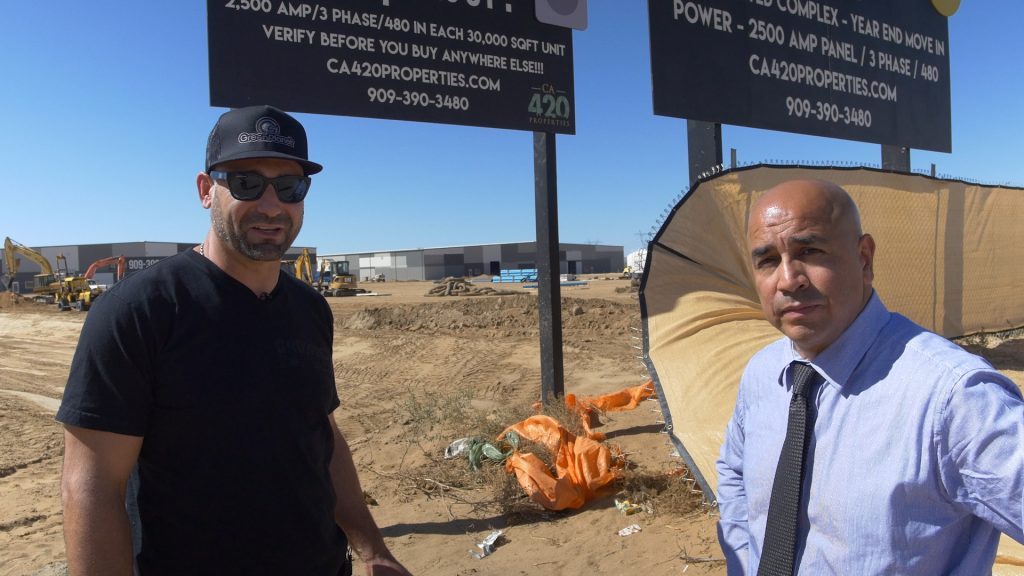 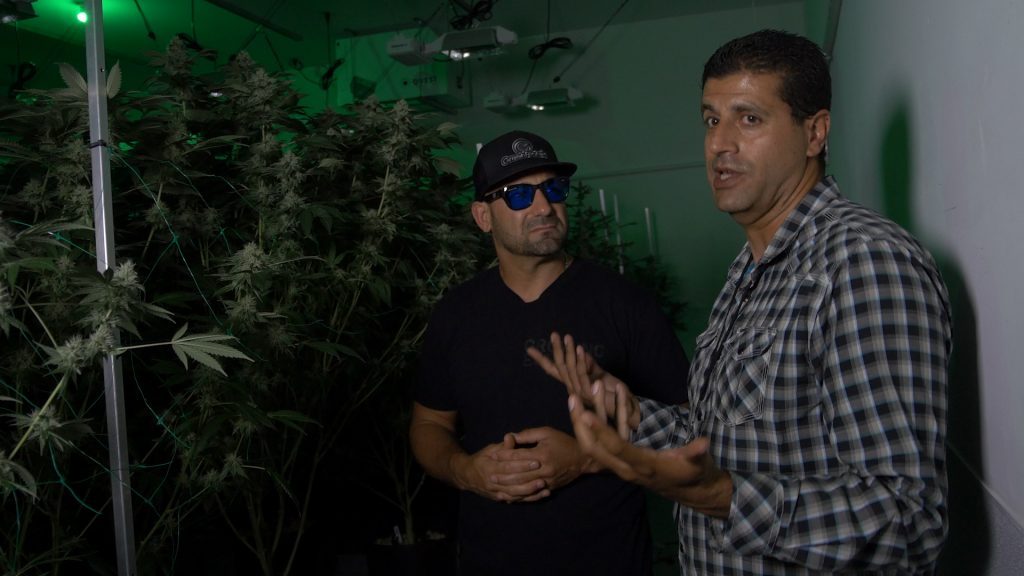 The City of Adelanto isn’t just making it easier for growers to set up shot. They also do a great deal of engaging people in the culture surrounding cannabis by hosting events such as Abracadabs founded by John Mendoza. Why do people love these types of events? Apart from the obvious, let’s find out.

Abracadabs takes place every year in March and renites thousands of people from all over the country. What can you expect at Abracadabs? Lots of passionate people, cannabis, and the welcoming culture that brings everyone together. There are educators there for people to learn more about the cannabis plant, opportunities for businesses, legalities and how to get legalities, information for doctors and patients, and product samples.

But Abracadabs is not just about weed. If you’re a music enthusiast, hundreds of artists play over the whole festival from a wide array of musical genres. It’s not just dabs that are the big thing at Abracadabs, a huge part of it is about the infused food. Places like Kush Tacos, TKO Edibles, medicated cotton candy, hot dogs, bacon wraps–you name it, it’s there. John hopes Abracadabs can help change the stigma around cannabis and educate people. It’s helping people not only medicinally, but it’s helping people get jobs. You can learn more about Abracadabs at their website: www.abracadabsfestival.com

In Adelanto, something we noticed, apart from acceptance, was the ongoing theme of organisation and involvement. Everyone seemed to be on the same page when it came to cannabis, especially Jerry, head of the Adelanto Grower’s Association. Undoubtedly, this plant is having a hugely positive effect on this community.

The Adelanto Grower’s Association was formed to be a part of an association with standards. They want to stay in conformed scenarios where you don’t start your operation until you have all your confirmed paperwork in order, stamped, and approved. There’s a win-win-win scenario going on with Adelanto, and it’s only in its infancy stage.

Now we head over to David Robinson, the Garden Sage, to see his opinion on cannabis and its relevance today. The relationship between cannabis and humanity goes back to the dawn of humankind. Quite possibly one of the first plants to be cultivated by humans, cannabis was used as a food and a medicine for millennia. David feels this plant not only brings human being together, but brings us back into a partnership relationship with each other, between men and women, and between our species and the planet. David considers cannabis a gateway to gardening. Most often, when his clients start growing cannabis, they start growing more fruits, more vegetables, more flowers, and it opens up an entire hobby that would have otherwise never interested them. 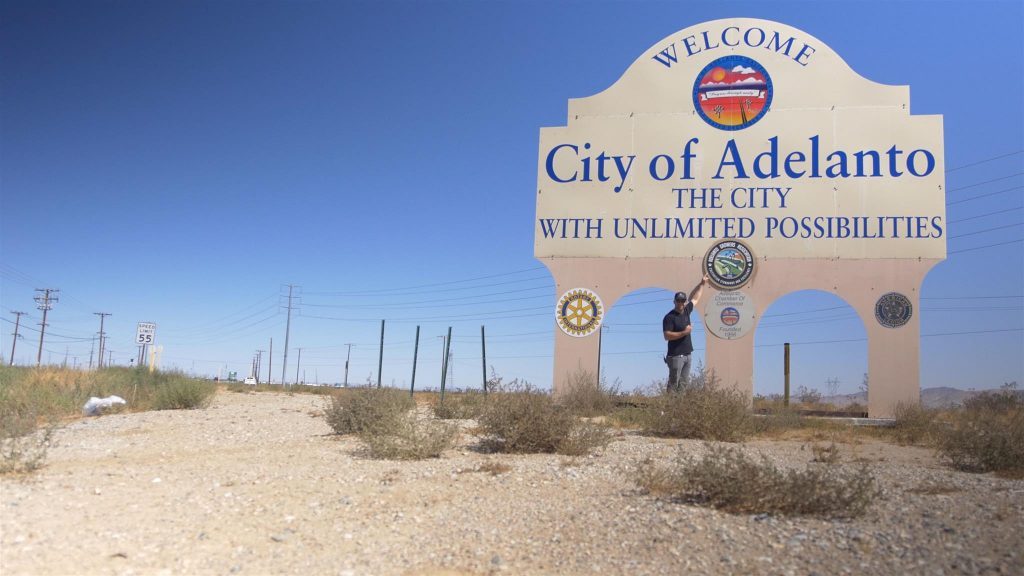 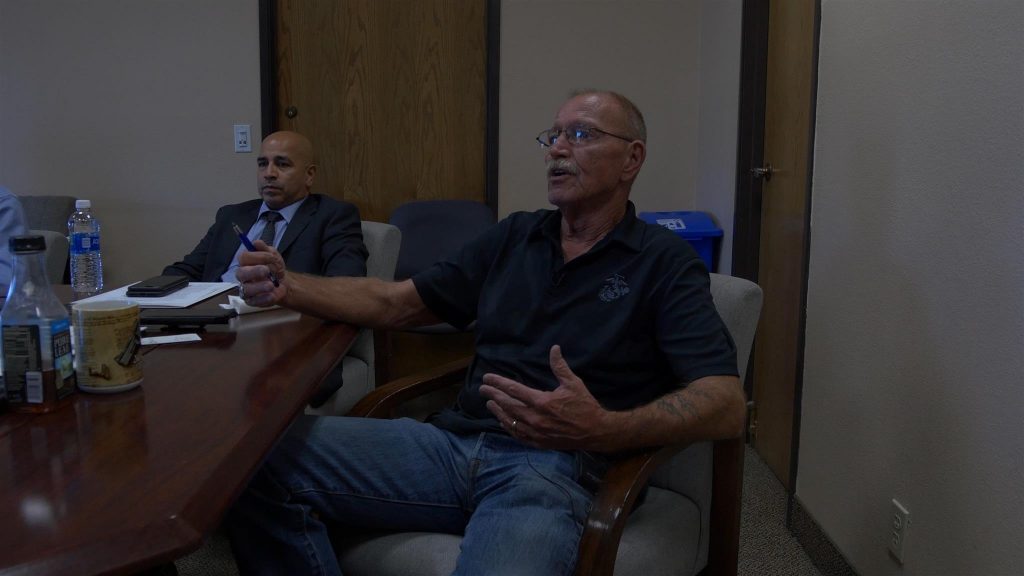 As cannabis becomes a mainstream method of mind-altering medicine on the planet, David fully believes that human beings are going to become more compassionate, caring, and reasonable.

In this episode of Growing Exposed, we saw a city that was on the verge of bankruptcy become the largest hub of medical cannabis cultivation in the US. We learned how cannabis is having a positive effect on communities in the Adelanto area, such as the Abracadabs festival and how the Adelanto Grower’s association is helping growers get ahead in contributing to the community as a whole.

For all the latest and greatest on cannabis cultivation visit us at www.growingexposed.com.